Does anyone have any suggestions for somewhere to try to get some good shots of this from? I'll need somewhere with minimal light pollution of any kind.

I'm hoping to get a shot or two like this:- 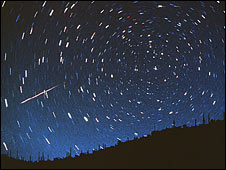 So, IS that big round white thing really made of cheese?
Top

Cheers. I'll take some test shots to get the exposure/aperture etc correct first. I guess what I'm asking is - is there a rough distance you have to be from a settlement to get a good sky view or is it all geographical? I'm prepared to travel say an hour each way for a decent location (I have to leave for work tomorrow morning at 6am so not too far!). I was wondering about Glendevon maybe or falkland hill?
So, IS that big round white thing really made of cheese?
Top

I would'nt travel too far as the moon will be in the sky anyway. The moonlight will wash out any faint perseids
Celestron C100ED-R, Meade LX200 10" &  Series 5000 80mm Apo, Coronado PST

I was out last night and the skies opened up nicely after 10pm.
I managed a count of 6 in an hour so not the great peak evryone wa expecting. Did anyone count more?
Jupiter was magnificent last night and banding was clearly visible with 5" SCT.
Cosmic
Meade 8inch  SCT. Observatory mounted on an HEQ5 Pro using EQMOD Canon 1000D modified DSLR,200mm Dobsonian, 200mm Celestron C8, 15x70 Astro Binoculars. 2x Mintron ccd cameras, lots of other stuff.
Top

1st night caught a couple but poor due to high haze which had only a few gaps. Gave up fairly quickly.

2nd night about 1.5 hours, about 2 dozen plus, generally coming straight over the house roof towards the south-west, but some both west and also over the rooftops towards the Forth ("45-degree rule"). Generally all very short duration & fast, but not "sharp & distinct" as some sporadics I've seen in the past.

Caught 4 on about the same track as each other within a minute approx midnight-20, with 2 more similar couple of minutes later, so could well have been from an original parent fragment.

Clanny - I don't have a dark sky "round the back" but there are a couple of "sweet spots" that at least block the dreaded sodium lamps (and also the 5/8th moon on the 14th)!

Also found out later that several others in the street had also "been out looking" but had been keeping quiet so not to disturb anyone! So next year - must get more organised! :^)
Top

I kept an eye out of the study window whilst I was writing up my final project. The moon looked shrouded in Coulds and there weren't any obvious clear spots in the sky so I didn't bother. Once this uni work is out the way I'll spend a bit more time looking for some decent photo opportunities.
So, IS that big round white thing really made of cheese?
Top
Post Reply
8 posts • Page 1 of 1

Users browsing this forum: No registered users and 1 guest